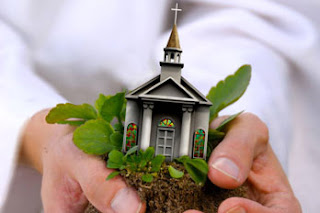 
For God’s own good reasons, he chose to grow his kingdom through our church in ways that meant our church itself didn’t grow.  In the early days of our church, meeting in a school building with metal folding chairs, we had a number of families travelling from a neighboring city about 40 minutes to the south.  They faithfully joined our body for the first years, but sensed a longing for a church like ours in their own community.
We rejoiced in that desire! As more families from Goldsboro began coming to us, it became clear that the right thing for us to do would be to plant a church in Goldsboro.  But, that would mean only about 4 years into our existence we would be sending out about a third of our current members and attenders.  Let’s be honest, it would also mean sending out a large portion of our budget.  But, we rejoiced at the opportunity and joyfully sent them out with a large lump sum of money to get them started.  By God’s grace, they have flourished and recently purchased a building; which, if you’ve ever been involved in a church plant would make you want to march around the building chanting - no more setup! We’re thankful for how God has continued to bless them and for the faithful gospel presence Crossway Church brought to Goldsboro. Kingdom Growth.

Christ Community Church, you have been poured out as a drink offering upon the sacrificial offering of the faith of many - far beyond what you’ll ever see or know in this life.  But, the one thing I know without a doubt in my soul is that you have not failed.

Posted by JonathanRBrooks at 12:28 PM

So beautifully written. Such truth and encouragement. Thank you, Jonathan!

Tim said...
This comment has been removed by a blog administrator.
9:06 PM

Tim said...
This comment has been removed by a blog administrator.
9:07 PM

JonathanRBrooks said...
This comment has been removed by the author.
12:15 PM

Tim said...
This comment has been removed by a blog administrator.
4:01 PM