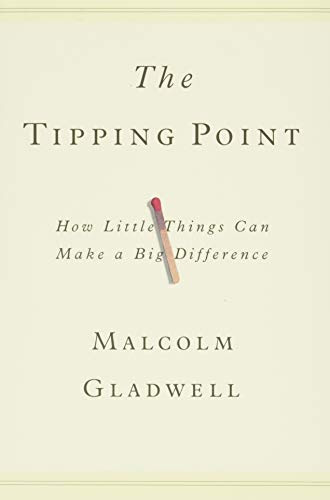 I know full well that I am a latecomer to this book. It was first published in 2000, the momenteous millenium that is now 6 years in the past. So, this review is not so much to tell about a new book on the market as it is to discover what we as Christians can learn from the information found in this book.

The Tipping Point was written by Malcom Gladwell, also the author of the more recent Blink. In Tipping Point he seeks to discover exactly what it is that turns an everyday event into an epidemic. In other words, how do trends move in our culture from a small, relatively insiginificant group to the larger population in a short amount of time. He is seeking to discover the "tipping point" at which something becomes a trend of epidemic proportions.

His point is not to study epidemics of the disease variety, but he does pull from that field to make illustrative points about how epidemics and tipping points operate in general. His main concern, however, is with human interaction and why some things "catch on" and others don't.

He argues that there are three main types of people that are key figures in an epidemic. Connectors, Mavens, and Salesman. (You'll have to read the book to understand who these people are. It is quite interesting.) He then goes on to argue that these figures also have to operate within a given context. But, when you put the right combination of these together you have an epidemic on your hands.

Perhaps the most interesting parts of the book are the asides where Gladwell probes into the reasons why people make decisions. He cites experiment after experiment that have been conducted which reveal rather odd influences on human decision making. Anything from simple head movements, facial expressions, to grafitti on the wall of a subway. The human mind is influenced to action in ways you and I perhaps have never considered.

I think this is where we can find value from this book as believers. We need to be aware of the ways in which sin can infiltrate our actions. The disturbing truth of the matter is that many times that influence in unknown to us. We are clueless that there are so many subtle inuendos that have dramatic affects on our decisions and actions. Therefore, we must be vigilant and strive to be aware of every possible influence that can lead down a path of unrighteousness.

So, while Gladwell obviously did not intend this to be the point of the book; he is simply describing his understanding of reality, we can learn from it nonetheless. May we study our hearts and minds well and flee from those things that lead us from communion with our Savior.
Posted by JonathanRBrooks at 8:55 AM

I feel as though I read this book vicariously through you, as you stopped every five sentences to tell me about something you read. Just kidding . . . I love that about you. It is interesting to apply these concepts to our lives(as Christians), as we consider the things that influence our behavior and decisions. As always, thanks for sharing!